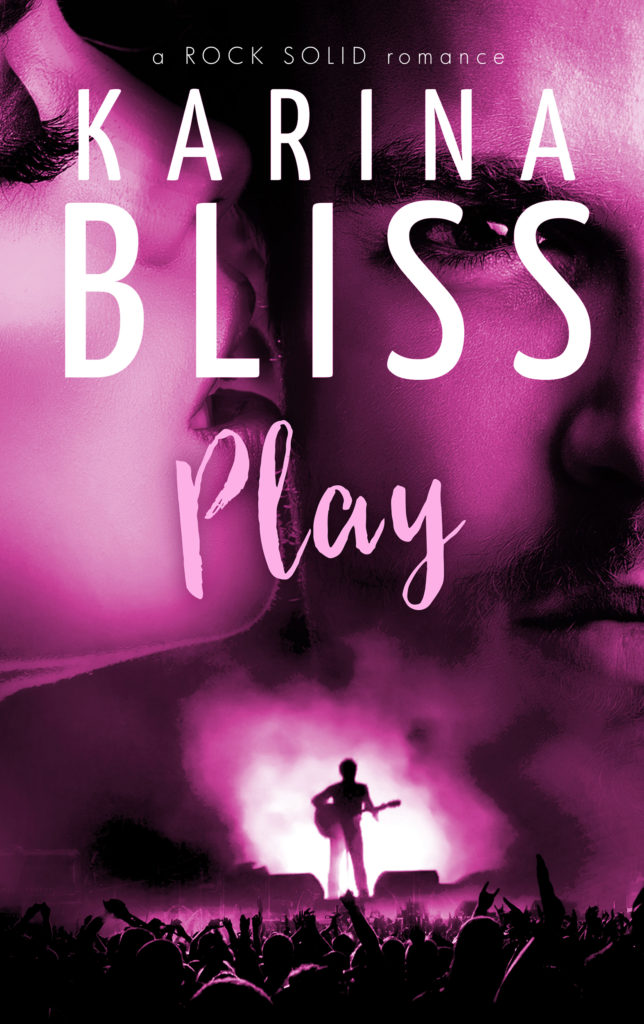 Rock star Jared Walker is within reach of career glory…but his marriage is in the pits. Determined to save it, he talks his wife into holiday dates with only one rule: they must pretend they are strangers. But when he discovers what Kayla really wants for Christmas, will he be able to give it to her?

Series Note: Rise starts the series but you can read Fall and Play in any order as they happen at the same time. Only Fall’s final scene takes place after Play’s ending, and there are no spoilers. Check out Fall here and Moss and Stormy’s book, Resurrection, here.

The hotel bar was stylized soulful, a perfect match for the man she’d agreed to meet.

Japanese floral arrangements arched toward their reflections in angled wall mirrors. Bamboo planters provided privacy screens between the black circular booths and their stylish occupants could be glimpsed through the green-leafed canes like exotic animals or colorful birds.

Kayla Walker, twenty-seven, married for seven years and mother of two under-fives, hesitated at the beaten bronze double doors. She tightened the sash of her winter coat to give her waist more definition. Under it was the dress he’d sent her, with a note indicating the time and place.

Her nerves still jangled from the diabolical freeway traffic that had made her twenty minutes late, and a chore list growing longer than Santa’s. Come to think of it, this place didn’t have its tree up yet either. If L.A.’s chicest venue didn’t give a damn that they were in the first week of December, why should she?

Head in the game, girl. Think sexy thoughts. The future of your marriage depends on it. No, don’t think that. And you’re not married, tonight. Remember?

Taking a deep breath, she approached her illicit date, who sat at a middle bank of overstuffed, velvet-clad sofas, his hair gleaming like midnight oil under the spill of mood lighting.

Even amongst the beautiful people, he stood out, lean and darkly handsome, a warrior poet with stubbled jaw and deep-set eyes.

A leather coat, black with a scarlet lining, was flung casually beside him, and he wore black jeans, black boots and a moss-green merino sweater so fine it clung to every line of his muscular torso. The picture of lounging grace, except for the tight grip on his beer. The small sign of nervousness warmed her. He isn’t sure I’ll show.

Seeing her, he stood, his relief giving way to a lazily confident smile that evaporated some of that warmth. When he bent to kiss her, she held out her hand instead.

His smile broadened as he returned her handshake. Yes, she’d decided to play.

“As long as you’re here.” He went to help her off with her coat.

“Let me warm up a little first.” She glanced around.

The dress was gorgeous but felt try-hard next to these casually hip sophisticates. She was too down-to-earth to pretend to be one of the cool people. And it felt like self-betrayal to try.

Skillful musician fingers teased the tension from her tight shoulders. “Stop over-thinking this. Tonight is about us. Just us. And this.” His fingers caressed the nape of her neck in a slow, soft slide and lust washed over her, so unexpectedly, that she closed her eyes to savor it. Vulnerability never used to be scary but she’d been rationing desire lately, trying to protect herself.

“Take off the coat, Kayla,” he said, his voice husky, and the flame of lust flickered a little with anger. She’d made a lot of concessions to get here this evening. Admitted her marriage was still in trouble, for one.

She moved away from those magic fingers. “How about you work for it?”

But there was a plea in the pirate’s eyes. Give this a chance. Meeting as strangers for a sexy time-out had been his idea. Fresh start, no baggage. Mentally, Kayla untethered the mule bow-legged under the weight of hers.

Think sexy thoughts. “We should use pseudonyms to protect our anonymity,” she suggested, trying to get into the spirit of this. “You can call me Betty and I’ll call you Bob.” Oh yeah, Kayla, real sexy. The names of your geriatric neighbors.

“Bob” was struggling not to laugh, and she let him off the hook by chuckling first. It helped. I don’t have to treat this date like an exam I have to pass. All I have to do is lighten up.

Taking a seat, she caressed the couch’s red velvet upholstery. “This place is ex—sumptuous.” Expensive was a loaded word, with his career was in transition. Famine to feast to somewhere in the middle, she suspected, at least for the next six months. But they weren’t here to talk about the economy.

“Bob” settled beside her. “Well, I was going to suggest a beer at a local dive but I figured I’d save that for the second date.” He reached for her hand and she moved it.

“If there is a second,” she teased. “Don’t count your chicks, rock star.”

“Am I taking too much for granted ag—” He stopped himself. “Take off the coat…Betty. You look like you’re about to run away and it’s making me nervous.”

She undid the top button. “The dress you had delivered is skin-tight…” She inched the coat up her leg to show how the red jersey-silk clung. “I might need alcohol first.”

His dark gaze caressed her thigh. “Or we could forget drinks and get a room.”

“Without even buying me dinner?” She refastened the top button. “Shame on you, Bob.”

He tried to look chastened, but his eyes gave him away. Like the woods in the Robert Frost poem, they were “lovely, dark and deep.” But there were shadows there, sharp-edged. Her beta mate had turned wolf. Every time he returned from touring it took him longer to re-assimilate into real life.

Except he wasn’t hers, she reminded herself, not tonight. Tonight, he was a sexy stranger.

“We could get room service,” he encouraged. “I’ll buy you filet mignon, lobster, anything you want. And then we’ll order apple pie”—her favorite—“and see where we can get the cream.”

Kayla fell out of character. “God, no! Too messy.”

Getting her four-year-old to decorate home-made Christmas cards with paint, glue and glitter had seemed liked a good idea, until Madison’s baby brother had gotten involved.

The red paint and glitter all over the kitchen floor made it look as though Tinkerbell had been murdered there. But they weren’t here to talk about mommy’s day.

“Then how about a long soak in the spa bath instead?” Bob’s gaze dipped to the swell of her breasts under their woolen covering. “Imagine the luxury of uninterrupted leisure, Betty. Luxury bath oil instead of a budget gallon of banana-scented bubble bath. Not having to share with toys and kids…”

“It’s a simple plan. I’m going to seduce you into leaving your husband for me.”

Her fingers faltered, then she laughed. For a moment Jared had sounded so serious.

“Betty,” she reminded him.

The cocktail waitress arrived, leggy and blond, with a professional smile that got real when she looked at Jared Walker. Her gaze darted to his date, assessing and then dismissive in an unconscious gesture that would have been insulting if Kayla hadn’t become so used to it.

A pretty woman carrying some baby weight was a six, at best, in Hollywood, where even the waitresses—many of them would-be models or actresses—were often eights.

“Welcome to Joy,” The blond angled her body toward Jared. “May I take your order?”

Kayla shrugged off her coat. Her husband was good at buying clothes but the dress was tighter than she’d worn since having kids, with a deep cleavage she had to stop herself adjusting. “Let’s have a drink and see what happens.”

His eyes were hot as he glanced down her dress, and a shiver of anticipation quickened Kayla’s blood. A heady sense of power.

She looked at the waitress, who was clearly revising Kayla’s grade. “Mulled wine, please.”

“Another beer for me, thank you.” The slow curve of his smile was still there as he looked up. The blond sucked in a breath.

“I see you chose one of our craft beers, let me tell you about the others.” As the waitress launched into serious flirt mode, Kayla surreptitiously checked her cell in case the sitter was having trouble settling the kids.

A masculine hand covered the screen. “Remember the rules—cells only for emergencies.” Jared confiscated it. “And give me your wedding ring.”

Kayla tugged it off. “I see you’ve already removed yours,” she commented. The wedding band of cheap, shiny gold—all they could afford then—gleamed as she dropped it into his outstretched palm.

“No ties, no responsibilities and no guilt,” he reminded her. “This evening we’re all about…pleasure.” His pause left no doubt as to what that pleasure entailed. Tangled sheets and tangled bodies.

“I’ll get your drinks,” the waitress murmured.

“Was that wise?” Kayla said, when she’d left. “Your face has been everywhere the past couple of months.”

“I could tell she didn’t recognize me. You look gorgeous,” he added. “I got the size perfectly.”

And wasn’t that like a man. Tight is good, tighter is better. God bless their sexual myopia. “So, Bob.” Channeling a throaty-voiced temptress, Kayla sat back. “Is this the part where you tell me your wife doesn’t understand you?”

“And you tell me your husband takes you for granted.” His tone was wry, and their eyes met in rueful acknowledgment of his earlier slip.

She took pity on him. “Or we can skip that part,” she suggested.

“You’re going to have your work cut out for you, persuading me into an affair, Bob.” She crossed one smooth leg over the other, watching him watch. The light caught the sparkle on her red stilettos—the shoes he’d bought for her when he’d been accepted into Rage. “I’m a happily married woman.”

“Yeah?” He caught the stiletto as it slipped off her dangling foot. “How’s the sex been lately?”

This 30,000 word novella will form part of a Christmas anthology with four other authors (wait until you hear who they are!) and we’ll have an incredible release week price. Sign up to my newsletter and I’ll send you a notification to make sure you don’t miss out.

“I ADORED this novella. Play is deeply romantic and wonderfully emotional. I can’t wait for more from the Rock Solid series!” ~ Nalini Singh, NYT bestselling author of the Rock Kiss novel series

“Watching these two reconnect was exciting and thrilling and all kinds of emotional.” ~ Craves The Angst Reviews

“The sexual chemistry between Kayla and Jared leapt off the page and I enjoyed their non-sexual connection too… I read this in one sitting.” ~ Kaetrin, Dear Author