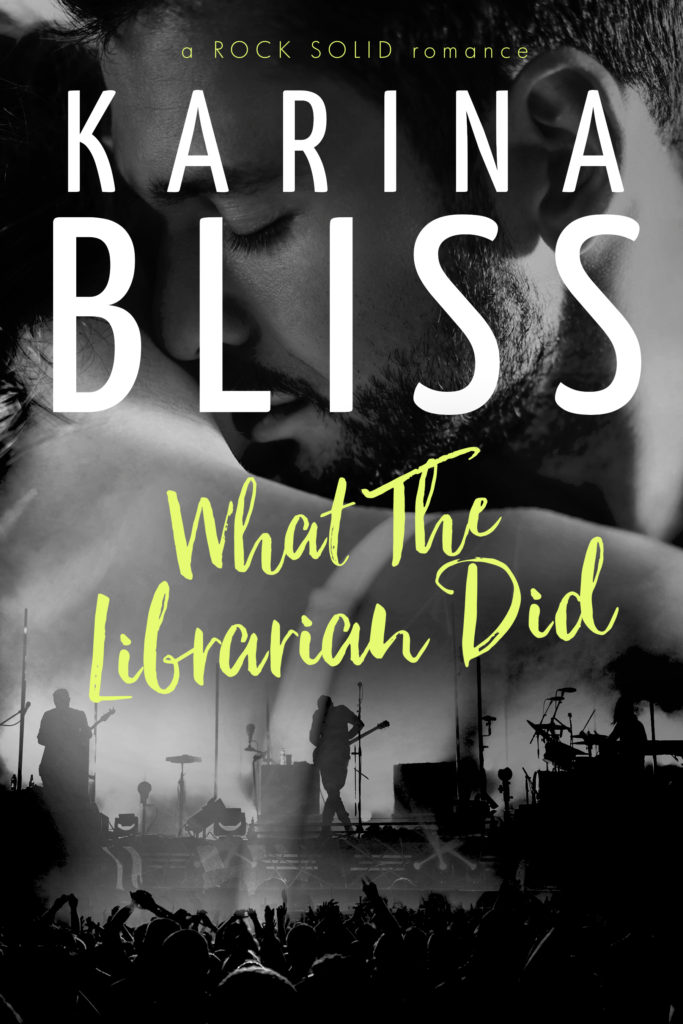 Is Rachel Robinson the only one on campus who doesn’t know who Devin Freedman is?

No big deal except that the bad-boy rock star gets a kick out of Rachel’s refusal to worship at his feet. And that seems to have provoked his undivided attention.

Devin, the guy who gave new meaning to the phrase ‘sex, drugs and rock ‘n roll’.

Devin, the guy who somehow becomes wedged between her and the past she’s kept hidden for years.

It’s up to this librarian to find out first-hand just how ‘bad’ he really is. Because her secret – and her growing feelings for a man who claims he’s bent on redemption – depend on his turning out to be as good as he seems.

Which is really, really good.

“Isn’t this the second marriage proposal you’ve turned down?” said Trixie. “Face it, Rach, you’re a heartbreaker.”
“With that imagination you should be writing fiction not shelving academia.”  Kneeling on the floor, Rachel Robinson snipped through the tape on the carton of books addressed to Auckland University library then glanced at her assistant. “I’m a thirty-four year old librarian not Scarlett O’Hara and Paul is probably breathing a sigh of relief right about now.”  At least she hoped he was. He’d been upset last night – and she still was.
Both of them had expected her to say yes.
“That’s another thing,” said Trixie with the bluntness of youth. “Rejecting proposals is poor policy for a woman who wants a family. You may look twenty-nine but your ovaries are knocking thirty-five.”
Normally her protegee’s homespun lectures were entertaining, coming as they did from a twenty-year-old Goth wannabe with dyed black hair and a nose stud. Today they struck a nerve. “Maybe I’m meant to devote my life to my work.”
“Now that’s just crazy talk.”
At the other end of the counter, a student approached the help desk and pressed the buzzer. “Yours,” said Rachel thankfully. The first day of the university year didn’t start until tomorrow but the smart ones were getting in early.
Trixie bent down and gave Rachel a fierce, parting hug. “I hate it when you’re unhappy. Go tell Paul you’ve changed your mind.”
So much for putting on a brave face. Hauling the books out of the carton and stacking them under the counter, Rachel wished it was as simple as that. Lately her left brain didn’t know what her right brain was doing. Tentatively prodding her feelings she found no regret or remorse, only a guilty seam of rock-solid relief.
Standing up, she closed her eyes, breathing in the heady smell of institutionalized tranquillity, and tried to internalize it. Help me, she prayed silently. Why do I run every time I’m close to marriage?
Someone cleared his throat and Rachel opened her eyes. A man waited, impatiently frowning at her.
He was dressed in faded jeans with slashed knees and a too-tight olive-green t-shirt stretched over muscled biceps. Ruggedly tanned he had sun-streaked russet brown hair curling past his collar.
It wasn’t even that he had a five o’clock shadow at 9.30 a.m. in the morning that screamed “bad boy.” To Rachel’s eyes, that simply made him scruffy. And most certainly his menace wasn’t in his boots, butter-soft leather and, good lord, purple?
No, it was the arrogant way he stood – feet planted wide, arms folded across an impressive chest. It was the dragon tattoo that curled the length of one muscled arm. But mostly it was the sleepy sensuality in the hooded hazel eyes casually scanning Rachel like she were part of a female buffet. She got the impression he was already very full but might possibly squeeze in dessert – if it was handed to him on a plate.
The woman in her bristled but the librarian mustered a professional smile. “Can I help you?”
The man didn’t smile back. “I heard there was a library tour for those new to the college.” His voice was deep, his accent American.
Rachel reached for her timetable. “You’re a day early but if you give me your name I’ll book you in for tomorrow.”
There was a brief hesitation. “Devin Freedman.”
“Devin. Spelled o-n or i-n?”
His mouth relaxed its tight line. “I-n.”
“I can give you an informal look around now if you like.”
For some reason his guard went up again. “I don’t want any special treatment.”
“You must be a student,” she said dryly, “if you were a lecturer you wouldn’t say that.”
Narrow-eyed, he assessed her and Rachel nearly told him to lighten up. Then a horrified thought struck her. “Oh lord, you are a new lecturer.”
A smile broke through the cloud of suspicion. It did strange things to Rachel’s stomach. On the other hand she’d been too upset about Paul to eat breakfast.
“No,” he said, “not a lecturer. And I would appreciate a tour. It’s going to be hard enough tomorrow being the oldest student here.”
“Don’t worry, we have quite a few adult students. I assume you’re part-time?”
“Full-time.”
Rachel hid her surprise. Except for the boots he didn’t look like he could afford to pay the fees without working. On the other hand, with that body, he probably made good money working nights in a male revue. She said briskly, “What degree?”
“Bachelor of Commerce.”
“Okay, Devin… my name’s Rachel Robinson and you’re in luck. I’m the subject librarian for business and finance. Follow me.” She spent the next fifteen minutes walking him through the library, while he listened intently, saying little. “You’re American,” she commented at one point.
“No.”
Okay, we don’t do small talk.  “We have a few library tutorials of interest to you, let me get you some brochures.” She led him back to the counter and started rummaging through a filing cabinet.
“I’m sure I saw him come in here.” The voice was female, very young and slightly breathless.
Another responded with a giggle, “Do you think he’d sign my bra?”
Startled, Rachel looked up. Devin had vanished and three teenagers milled around the entry, two girls and a boy.
“You promised you’d be cool about this if I brought you,” he complained, caught Rachel’s eye and lowered his voice. “Shush, let’s just go in and look.”
“Can I help you?” Rachel used her librarian’s voice.
The boy dropped his gaze. “Ah no, we’re just looking for someone.”
“Famous,” added one of the girls, smoothing down her skirt and scanning the rows.

“Romance readers have a noise we make when we mention a book that’s tremendously good. It’s somewhere between a gasp and a sigh, and while I can’t reproduce it in text, trust me, any romance fan can demonstrate the Good Romance Novel Noise for you.  So here is my list of this year’s best romance books, those that rocked my socks, blew my mind and caused me to make the Good Romance Novel Noise.” ~ Smart Bitches, Trashy Books Best Romance 2010 list posted on Kirkus Reviews

“This is a nuanced romance and Rachel and Devin are vibrant characters… It’s a bit of a tear jerker toward the end, but the emotional aspects of it are well balanced with humor and strong dialogue. I can’t recommend this book highly enough.” ~ A- from Jane at DearAuthor

“I loved everything about this book. I was thinking I’d go with a B+ before I started, but as I wrote this review, I remembered just how good it was. An A-, then.”  ~ Rosario’s Reading Journal

“With approximately 250 pages to tell a story it takes a good writer to put all one conflict in a story, it takes a truly talented writer to be able to expand that one conflict into two, and resolve both to the satisfaction of the reader. That is what Ms. Bliss was able to do with What the Librarian Did” ~ Sandi Shilhanek, Fresh Fiction

“The chemistry between Devin and Rachel is convincing and Devin definitely burns up the pages as a sexy man who retains enough of the bad boy to give the story an extra dash of fantasy…Serious at times, What the Librarian Did tends more toward the humorous side with laugh out loud moments. Add to that a good amount of dialogue between the leads (always an important factor for me in grading) and this is one satisfying romance wherein opposites make a very effective whole. B+.” ~ Lea Hensley at allaboutromance.com

“Rachel isn’t my favorite librarian romance heroine ever, but she easily lands in the Top 5 and Devin’s bad boy charm makes him the perfect foil. Karina Bliss is a new discovery for me in the SuperRomance line, and I look forward to reading more of her.” ~ Wendy the Super Librarian

“This is the first book from Bliss (great romance name) that I have read. She had me crying near the end, and her characters are flawed and believable, but still cool enough that you want to know them more. A great, easy read.  4 stars.” ~ AlbertaJenn at Chapters

“It looks like I’ll be hunting down another author’s back list. If What the Librarian Did is any indication, then Karina Bliss is an author who can give the reader a well developed plot and characters in the shorter format. Rating: A- ” ~ Leslie, Leslie’s Psyche

“What I really liked about this book was the way that the romance wasn’t always the most important thing, either to the characters involved or to me as a reader. I cared about Devin and Rachel in a more rounded way than that, and so it mattered to me that the other problems they were facing were resolved satisfactorily.”  ~ Ros at myromancereviews

“When Jane started talking about how great Karina Bliss’s What the Librarian Did was, I knew I would love the book. She told me about it on the phone, she tweeted about it, building my anticipation. By the time I purchased the book from eHarlequin.com, I knew I was going to love that book so much that I downloaded in a format I generally don’t like (secure epub, aka ADE). And I did love the book. But I also loved being able to talk about how much I loved it with Jane and recommending it to other people I knew were looking for a well-written, emotionally poignant romance. My reading experience of that book started days before I even purchased the book and continues to this day, as I talk about how much I enjoyed it.” ~ Janet from Dear Author in an article entitled: “The Value is Not Just the Content”